The Department of Childhood Studies at Rutgers University, Camden, is delighted to announce the selection of Steve Bernardini and Matthew Prickett, doctoral candidate in childhood studies, as the 2012- 2013 David K. Sengstack Graduate Fellow.  Stephen Bernardini and Matthew Prickett were selected as the next Sengstack Fellows based on their outstanding academic work and leadership within the Department of Childhood Studies.

Stephen Bernardini recently finished his third year as a doctoral student in the Department of Childhood Studies. Mr. Bernardini has maintained a 4.0 grade point average while matriculating in the program. His important and creative research on the intersections between childhood, sexuality, and “queerness” has been presented in a number of different venues. Most recently, Mr. Bernardini presented a paper at the Visions and Voices of Childhood conference at Rutgers University titled “Consenting to Stranger Danger: Unearthing the Sexually Predatory Child.” A version of the paper has been submitted for publication in the forthcoming edited collection, Childhood, Sexuality and Sexualisation. He is also co-writing a paper with Dr. Robin Stevens for the Journal of Sexual Health Education titled, “Real Life: Social Worlds and Sexual Risk Taking among Young African-American MSM.” Last summer, Mr. Bernardini was granted a fellowship to study at the School of Criticism and Theory at Cornell University with eminent queer theorist Dr. Kathryn Bond Stockton in a seminar titled “Sexuality and Childhood in a Global Frame: Queer Theory and Beyond.” His time at Cornell University informed much of Mr. Bernardini’s dissertation research, which explores how risk relates to the construction of childhood, specifically through ideas regarding child sexuality.

Matthew B. Prickett holds a BA, along with a MA, in English from Longwood University and an MA in Children’s Literature from Hollins University. Since beginning his PhD studies in Childhood Studies at Rutgers-Camden, Matthew B. Prickett has presented his research at several conferences, including the Children’s Literature Association’s annual conference and the Mid-Atlantic Popular/American Culture Conference. He has published articles and book chapters on L. M. Montgomery, C. S. Lewis, and Mary Downing Hahn. His research interests include children’s literature, history of childhood and children, and children’s role in the history of religion. Matthew’s dissertation will focus on children and the religious movements of early nineteenthcentury America.

The Department of Childhood Studies is pleased to welcome Steve Bernardini and Matthew Prickett to the growing number of Sengstack scholars supported by the generosity of Mrs. Alice Sengstack, who has endowed this fellowship to honor the memory of her husband, David K. Sengstack, Rutgers College Class of 1944. Our deepest thanks are owed to Mrs. Sengstack for her generosity in endowing this fellowship in Mr. Sengstack’s name and for her commitment to making a reality of her vision of a better world through understanding children and childhood. 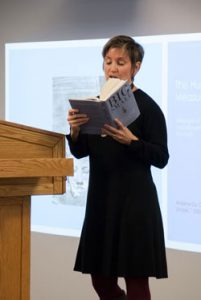